June 24th 2021, marked the 111th birthday of one of the most iconic motor manufacturers in history, Alfa Romeo. The Italian brand is synonymous with power and sporty styling. So many beautiful and famous vehicles have been produced over the years.

Here, in homage to the achievements of Alfa Romeo over those 111 years, we provide you with, in our opinion, the Top 10 Alfa Romeo models ever built. 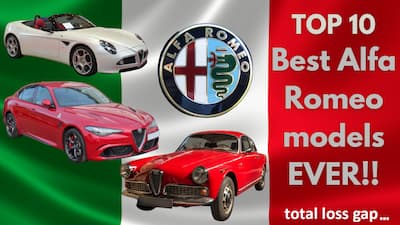 This one we simply could not leave off the list. The Alfasud was set in the 1970s and is a lot of fun.

The Alfasud was Alfa Romeo's first front-wheel-drive automobile, which debuted in 1972.

The tremendous dynamic capabilities of the flat-four powered Alfasud was a shock to the motoring world, given Alfa's lack of expertise with compact front-wheel-drive cars.

The car was entertaining in 'Turismo Internazionale' form, which resembled a twin-carb Sprint Veloce coupe and gave later Quadrifoglio Verde Golf GTis a run for their money.

This was one of the first Alfa's that was affordable to the motoring enthusiast. Even base-level Alfasuds were fun to drive, with responsive and grippy performance guaranteed.

The 75 was a landmark car for Alfa. It was the last car designed entirely by Alfa Romeo before Fiat got involved.

It had an attitude too. Boxy looks were out of fashion in the late '80s, but the 75 managed to wear its square lines well and stand the test of time.

Underneath the squared-off body, a refined chassis and a perfected suspension provided the last rear-wheel-drive mass-market Alfa Romeo with an almost perfect 50/50 weight distribution and excellent handling.

Of course, there was a successful race going version, while the V6 powered 3 litres and a 2-litre twin-spark offered sports car excitement in a family car shell.

It had a free-revving twin-cam engine, uni-body construction, modern design, and decent performance.

And as is a pre-requisite of all well regarded Alfas, it had a respectable racing pedigree also.

The Stradale cannot hold a candle to many other Alfas on this list in actual sales. Officially Alfa Romeo state they produced 18 cars. Rumour has it that only 13 were delivered, and just 9 of those were to retail customers.

But look at the car. This car has to be one of the most beautifully designed cars ever. Whether or not it was a retail success is not relevant really. It has to be in the Top 10 Alfa Romeo's ever made.

Was it built? Yes. Was it an Alfa Romeo? Yes. Is it stunning? Yes. That's good enough for us.

In the early years, Alfa Romeo's most notable legacy is as a maker of race cars.

The affordable road-going examples of Alfa Romeos were rare and always expensive, which led to production being very limited.

The first model on our list was based on a successful racing model.

The Alfa Romeo 8C series was introduced in the early 1930s.

A straight-eight 2.3-litre engine initially powered it. This was later developed into a 2.9 litre.

It generated plenty of grunt for its time, and the Alfa 8C was regarded as a premier sports car of the time.

There was a time when the world loved big, luxury saloon cars with big petrol engines.

Back in 1978, to compete in the area, Alfa Romeo and Lancia teamed together with their parent company Fiat and, oddly, Saab to develop a front-wheel-drive base chassis.

It was known as the Type Four platform. From it, the Lancia Thema, Saab 9000, Fiat Croma and Alfa Romeo 164 were born.

Whilst most of the group were fine-looking cars, the Alfa Romeo 164 combined styling from Pininfarina and the new Busso V6 engine.

In short, it was the best of the bunch by a mile.

The Quadrifoglio version boasted a 24 value head, and a four-wheel-drive version of the 164 was produced later in the production run.

The Giulia Sprint GT was first made in 1963 and was based on a more diminutive version of the Giulia compact executive sedan's floorplan.

The coupe was one of Giorgetto Giugiaro's first works for Bertone, and it was pioneering in terms of how the glass defined the cabin's size and shape and how the headlamps were merged into the grille.

The model was equipped with the now-famous Twin Cam engine, a five-speed manual transmission, and all-around disc brakes, all of which were still uncommon in the early 1960s.

The GTA model, which had been on the market for 14 years in many enhanced forms, cemented the car's status.

The 'A' stood for 'Alleggerita,' which is Italian for 'lightened.'

The Alfa Romeo Spider was a two-seat, front-engined, rear-wheel-drive roadster. The Spider was manufactured and marketed by Alfa Romeo from 1966 to 1994 in four generations (aka Series).

Overall, nearly 125,000 Spiders were built, with the Series 3 version proving to be the most popular, with over 50,000 versions made.

As a 28-year production run may signify, the Spider was received well by the public.

The last Spider was built in April 1993 and proved to be the final rear-wheel-drive, Alfa Romeo, before the 8C Competizione of 2007.

The new Guilia Cloverleaf (Quadrifoglio in Italian) was the cause of much excitement before its launch. This headlining Giulia model was expected to be a direct competitor to the BMW M3, the Audi RS4 or any Mercedes AMG.

In truth, all levels of the new Giulia look stunning, especially in the Competizione Red launch colours. Looks have never been an issue for Alfas in general.

Under the bonnet, you will find a 2.9 litre 6 cylinder twin-turbo engine capable of 503 brake horsepower. The unit is the six-cylinder development of the twin-turbo V8 found in Ferrari California's and the 488 GTB.

It does not disappoint.

So with so many beautiful Alfa Romeo cars down the years, which one has made our number one spot?

Just when you thought Alfa might end up producing cars that look like everyone else's, they restore your faith. First made in 2007, the 8C Competizione was only built for three years. However, it more than left its mark.

The stunning supercar was powered by the 450bhp V8, also found in the Maserati.

As can be the case with Alfa's, it sounded even better than it drove but still got down the road impressively enough.

Such was the interest in the model that Alfa managed to sell all forward build slots in no time at all.

Do you agree with our list? Are there any Alfas that you think we have missed? If so, please feel free to leave them in the comments below.