Why do modern cars not rust?

When you think of cars of the 1970s and '80s, one of the first things that probably comes to mind is rust. And while some older cars are rusted beyond repair, many more could still be saved if given some TLC.

Anyone who bought a car in that era secondhand would undoubtedly be wary of looking for the tell-tale signs of filler and overspray on vehicle sills, arches, and wings.

However, rust and corrosion are not so much of a problem with modern cars. Why is this the case? Why are modern vehicles more resistant to the onset of rust? 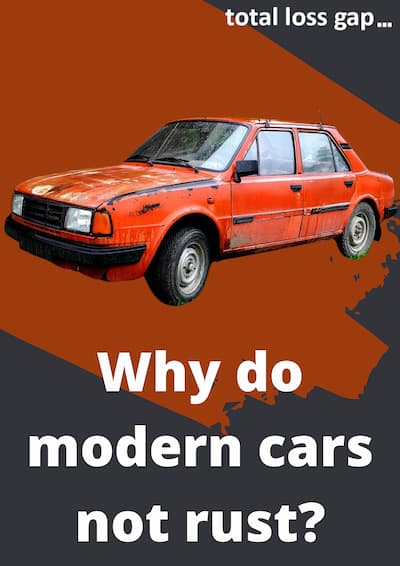 Here we explain some of the advances that mean a rusting car is (nearly) a thing of the past.

Paint on modern cars is better.

Most modern cars are painted with a primer and sealer before final painting, reducing contact between the metal body and the oxygen in the air.

Anti-corrosion waxes are also applied to protect vulnerable areas of rims or other parts.

Modern cars are built to be more watertight.

There were common areas on older cars that were prone to rust. These included wings and sills, for example. This was often because of the design of the body panels. Water, often mixed with salt in winter months, could accumulate in areas of these body panels and eventually, if left undisturbed, rust inevitably ensued.

Most modern cars use bolts instead of rivets to attach sections, reducing penetration through metal sheets and allowing tighter seals less prone to water intrusion. The design of areas like inner wings also ensures water runs off instead of accumulating.

It was not just the body panels of older vehicles that suffered from corrosion.

Modern motor oils perform better than older lubricants, offering superior protection against a chemical attack by oxygen and other corrosive elements in the air.

The metal parts of a car are much cleaner than in years gone by, when, until catalytic converters were introduced in the late 1970s, petrol engine fumes contained gaseous hydrocarbons from unburnt fuel. These would react with atmospheric oxygen to form sludge and other chemical byproducts that rusted the exhaust system.

Modern cars are painted with a very thin layer of paint which is more scratch-resistant than older types of paint, giving modern cars a more extended rusted-through threshold than older cars.

Modern cars are made of lighter materials, which do not rust as readily or severely as heavier metals did before them. Plastics through to carbon fibre feature far more in cars these days, and they simply do not rust.

In summary, rust on cars is rarer sight these days. So confident are some manufacturers as to the rustproof properties of modern cars that they offer full car warranties or rust protection plans, covering major structural components for up to ten years, or more, after purchase.

Hopefully, you will never have to reach for a tub of filler ever again!