Electric cars are coming, there is no doubt about that at all. But when do you take the plunge and buy one? Here we explain the reasons why you may want to buy one now and not wait any longer. 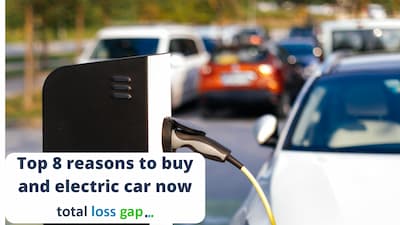 Saving the environment is a lofty goal, yet one that can be achieved by changing to electric cars. Electric vehicles emit lower amounts of pollution than fuel-based engines and have minimal effects on air quality when driven in an urban area because they don't produce any emissions! In addition, as more renewable energy sources are created, such as wind or solar power, this will only improve further still over time.

Lower fuel costs are a thing of the past. With electric cars becoming more and more affordable, it's likely that in no time at all, you'll be able to charge your vehicle for less than £3.50 per 100 miles! That means if gas prices continue going up as they have been, then eventually we will see an end to those high petrol bills once and for all.

The government has stipulated that electric vehicles will have lower VED (Vehicle Excise Duty) than typical petrol and diesel-powered cars and charge company car drivers less in income tax through Benefit in Kind rates.

Some may think electric cars are sluggish, but this is not true. Electric vehicles provide maximum torque immediately, delivering 0-30 MPH as quickly, or quicker than even the most powerful of supercars – in fact, the zero to sixty miles per hour times of a Tesla Model S P90D – 2.8 seconds, rather than 3.4 seconds like an Audi R8 5.2 FSI Quattro.

Let's face it, who doesn't want to avoid queueing at petrol stations? With electric cars coming into mainstream production and becoming more affordable, this may soon become a reality. But even if you do have an EV for daily travel purposes with no options of charging stations on your route back from work or school--don't worry!

More and more charging stations are appearing, and they are featuring fast charge technology to minimise the time you have to stay.

A grant has been extended for people to buy electric vehicles. The United Kingdom Government is also offering a 25% discount up to an additional £2500 on new cars that qualify with at least 70 miles range with zero emissions.

As the UK prepares for Brexit (Britain's exit from the European Union), they are implementing measures to lower their reliance on foreign energy imports and air pollution by encouraging more Brits to purchase eco-friendly hybrid or all-electric models instead of petrol or diesel-powered ones.

The choice in electric-powered cars is growing day by day

With more countries announcing plans to ban the sale of petrol and diesel cars (for example, the UK by 2030), there are now more choices than ever for electric vehicles. Many manufacturers have seen this move coming and plan to introduce new models released as electric only or hybrid/electric start options in coming years.

With increasing environmental pressures on our society, it seems that many are finally heeding warnings about climate change and pollution due to petrol or diesel-powered cars, which is causing an increased demand for electricity-powered alternatives. Hybrids or entirely electrically operated motors like those found in Tesla's latest Model 3 vehicle release last year (Tesla Inc., 2017). In fact, since 2015, when the total number was around 1 million units globally per annum has doubled up today to 2 million.

Electric cars may have lower long term maintenance costs than petrol or diesel-powered alternatives. The higher costs of replacing the battery on an electric or hybrid vehicle have been highlighted, but, realistically, these replacement costs will come down over time. However, with fewer moving parts, no oil changes etc., it would seem that servicing will cost less going forward.

The environmental benefits, cost savings and convenience of owning an electric car are hard to ignore. But if you've been unsure about whether or not it is worth switching over from a gas-powered vehicle, here are some reasons why you should buy an electric car today. These include better safety features for drivers and passengers, lower maintenance costs in the long run (no oil changes!), more torque, so they accelerate faster than gas-powered vehicles and no need to visit a filling station any time soon! With all these benefits combined with lower emissions that benefit our environment and your wallet, now is the time to make the switch.