A short Guide to Electric Vehicles

Electric cars (EV's) have been around for quite some time now, and as more people are becoming aware of the benefits they offer, more people are starting to take notice. This guide will explore the various types of electric vehicles you can choose from when deciding what type is best for your needs. This way, you'll know which one is right for you. 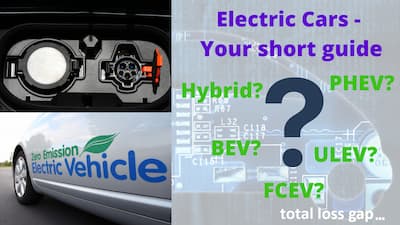 Battery Electric Vehicle (B E V) - A car that runs entirely on electricity, harvested from an onboard battery charged from the mains (for example, at a dedicated electric ChargePoint).

Plug-in hybrid electric vehicle (P H E V) - A car with a regular internal combustion engine and a rechargeable battery. This type enables either pure electric driving or a greater range by combining the petrol engine and the electric motor.

Like a car that runs on both a battery and a traditional combustion engine, the electric mode is perfect for short journeys. The hybrid powertrain uses regenerative braking and allows fuel to be saved by switching to electric power in optimal circumstances.

Plug-in Vehicle: A catch-all phrase for any vehicle with a plug point, including BEVs and PHEVs.

Electric Vehicle: This can be used as a universal term for BEVs, PHEVs and REx, but often refers to pure electric vehicles, i.e. BEVs.

Ultra-Low Emission Vehicle (ULEV): This vehicle emits less than 75 grammes of carbon dioxide per kilometre and hence qualifies for government incentives and subsidies in the United Kingdom.

Range Extended Vehicle (REx): For longer excursions, an EV with simply an electric drivetrain and a small fuel generator to charge the battery when the range is reduced. Generally, this is regarded as a form of PHEV.

Hybrid car: Any vehicle with a conventional internal combustion engine and an electric motor is a hybrid. Full, mild, and plug-in hybrid are the three primary forms.

Full Hybrid or Self Charging Hybrid: This is a hybrid vehicle that is powered by fossil fuels. When paired with a combustion engine, regenerative braking charges a rechargeable battery, which generates some electric power, but the car's energy is derived from gasoline. For short durations, the electric motor can only move the vehicle at low speeds.

A popular example is the Toyota Prius.

Mild Hybrid: In mild hybrids, a tiny electric motor is also included, but unlike full hybrids, it is primarily employed to assist the gasoline engine. The vehicle will not be able to run exclusively on battery power.

Fuel Cell Electric Vehicle (FCEV): This phrase refers to an electric vehicle (EV) powered by a hydrogen fuel cell. The car is powered by electricity generated by the fuel cells.

It's essential to understand the differences between all of these types of electric vehicles. Many different factors go into deciding which type is best for you, such as financial constraints and environmental concerns; however, at the end of the day, it comes down to what works best with your lifestyle. Think about how much you drive in a week and whether or not you have access to charging stations where you park on a nightly basis before making any decisions!