The Top 10 Ugliest cars ever made for the UK

The United Kingdom is host to many of the most beautiful cars in the world, but it also has its share of ugly vehicles. From a distance, you may think these ugly cars are just unattractive, but once you get close enough to see what they're made of, it's easy to understand why they belong on this list.

Here we look at 10 of the ugliest cars sold in the UK and ranks them from least ugly (10) to most hideous (1). We hope you enjoy learning about these not-so-pretty automobiles as much as we did putting together this list! 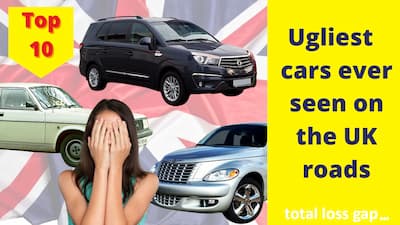 Now unlike many of the other vehicles featured in our Top 10, the Reliant Robin was actually quite good. Ugly, but good.

The Robin can claim to be the second most popular fibreglass-made car of all time. It has a production run of nearly 30 years and appeared in all kinds of popular culture like Ab Fab and in its Reliant Regal Super van guise famously in Only Fools and Horses.

However, it has looks that can only be described as 'oddball'.

So the design meeting at Morris went along the lines' So we have to replace the Marina with something fresh and new. Let's put new headlights on it and call it something trendy and foreign-sounding.' After struggling for a while, they came up with the name 'Ital'. Job done.

Sadly, it didn't work out. The awful-looking car was replaced by the Maestro in 1984.

Brought to the UK in the dying embers of Rover's demise, the CityRover was a rebadged Tata. Hoping to provide a budget, sub £5k option for bargain car buyers, it proved to be a massive letdown.

Poor build quality dogged its reputation (the dashboard was said to be held together with wood screws). The CityRover had nothing underneath to make up for its underwhelming looks.

At least Top Gear saw something good in it as they placed it only 2nd in the worst cars of the last two decades.

Like the PT Cruiser, the X90 can be viewed 'of its time, but its time soon ran out. It can be argued that the X-90 was a trailblazer paving the way for compact crossovers. It was still ugly, though, even by today's standards.

To be fair to the FSO, there is any number of late 70's and early 80's cars from the Eastern Bloc that could have been included in this list. Let's just say the Polonez represents them all.

In common with many, the Polonez has its ancestry underpinned by an old Fiat. In this case, the Fiat 125p. The problem with the Polonez was that this was the same Fiat 125p used on its predecessor, the Polski. That made the Polonez very much out of date.

The answer? Make the body look out of this world. And they did just that; it looked like it came from an alien planet. Presumably, the production included some time in a vice to make the body as narrow and long as possible.

The addition of a 'sports kit' later did nothing to aid its looks.

Just six years after the iconic DS, french car maker Citroën launched what could be the worst designed car of all time.

If this car came from design school, it must have come from the entry class. The rearview is just hard to understand. This is possibly trumped by the oddly 'melting' bonnet to the front view.

Not one of Citroen's more iconic moments.

Whilst neither too distasteful nor remarkable from the front, the issues with the Rodius are clearly from a rear.

It appears that the design team could not make up their minds. The Rodius' biggest offense to the eyes comes at the back, where it looks like two designers submitted undecided if it should be an estate or a coupe. The answer? Let's do both!

The Nissan Cube started production in 1998 and was discontinued in early 2019.

The Cube was supposedly designed to look like Pac-man, but our love of this car comes more from the fact Nissan that could not quite get this one right.

What makes the PT Cruiser a potentially controversial choice is that it was quite a reasonably popular model when it was released in 2000. Initially swept along in a 'retro' wave, sadly, the PT Cruiser has certainly not stood the test of time.

The large boxy body is overshadowed by a v-shaped front in the car's design. The different coloured plastic bumpers in front and back of the PT Cruiser do nothing to helps its looks.

They even produced a convertible PT Cruiser. Less said about that, the better.

So to our number one.

We are not sure how many of the car-buying public Fiat actually consulted about their Multipla design prior to launch. Not many, we think, as it's comfortably made our list of the ten ugliest cars ever seen on UK roads.

While the Multipla may be ugly, it drives pretty well. It was also really practical with six seats. However, overall it is no surprise when Fiat decided to give it a much-needed facelift in 2004.