We are often asked at Total Loss GAP, about different situations that can occur, and whether our Total Loss GAP Insurance products will provide cover.

One of the most popular ones is will our GAP Insurance cover if your vehicle is stolen using the keys for the car.

Now we would love to claim this as some exclusive feature that makes our GAP products better than everyone else. Now we do have some features that we think does set us apart. Except cover for theft with keys is not one of them. 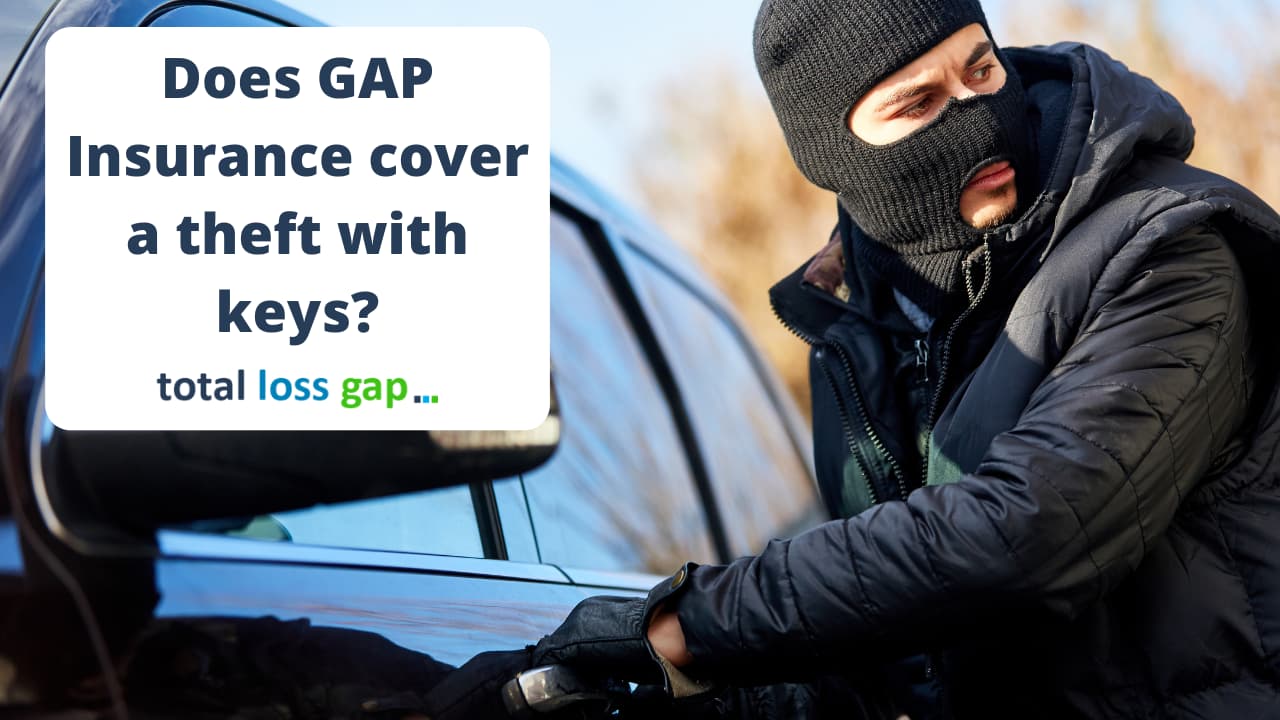 There seems to be some ‘urban myth’ than emanates from the marketing departments of some GAP Insurance providers that mean they promote cover for ‘theft with keys’ as unique to them. In our experience, we cannot recall seeing a GAP Insurance policy that doesn’t provide this cover in the standard policy terms.

Indeed we have been told by one customer that a GAP Insurance provider has offered them ‘theft with keys’ cover at an extra premium on top of their standard policy!

Why theft with keys is covered

Remember GAP Insurance is designed to work when your main motor insurer ‘writes off’ the vehicle following an incident. These incidents can include accident (fault or not), fire, flood and theft. The main point is that the motor insurer covers the incident in question, writes off the vehicle (instead of repairing or replacing it) and pays you the market value as a settlement.

Once this happens, then you can top up your motor insurers settlement with a claim on the GAP policy.

Mr Smith parks his car outside his home. He secures his car (by locking it and activating any immobiliser or alarm fitted), goes into his house. He locks his front door, puts his keys away and goes to bed.

At the dead of night, someone breaks into Mr Smiths house. They find the car keys and subsequently steal the vehicle. Mr Smith reports the break-in and theft of the car to the police and his motor insurer. His motor insurer decides to write off the vehicle as a ‘total loss’ and pays Mr Smith the market value of the vehicle in a settlement.

This situation is something our GAP Insurance can cover. Mr Smith has taken all reasonable precautions (has locked his car, set the alarm etc) and his motor insurer has settled his claim with a market value settlement.

Mr Jones pulls into the petrol station to fill up with fuel. When he finishes, he walks away from his car to pay for the fuel. Mr Jones has left his keys in the ignition and the car open. Someone jumps into the car and drives the vehicle away.

In this situation, the motor insurer will not typically payout as they may deem Mr Jones has been negligent with his property. By leaving the vehicle open and providing easy access to the keys, then it can be argued Mr Jones will not have met the terms of his motor insurance policy.

In this situation, our GAP Insurance policy will not cover the customer. If the main motor insurer does not payout, then you cannot claim on the GAP policy we provide.

We think all of that is pretty much common sense.

So the next time a GAP Insurance provider says that their policy will cover you for theft with keys, and others do not ask them one question. Where are the GAP products they think won’t cover any vehicle theft with the use of keys? We would love to hear about it!